The Impact of Public Art Projects on Human Health

Art has the power to connect us to places, to people and even to ourselves. Public art is a fascinating mix of political, sociopolitical and cultural dynamics that have a strong emotional effect, representing much more than surface beauty. We’d be wise to create more.

The influence and benefits of public art projects have been well-known for centuries. With the Italian Renaissance representing the golden-age of public art in Europe and President Roosevelt’s push for it in the early 1930s with the New Deal, governments and societies have embraced the effects of urban imagery for a variety of reasons — primarily the realization that art impacts people as much as people impact art.

How Big of an Impact Does Public Art Have?

Turns out, a lot. Colin Ellard is a neuroscientist who works at the intersection of psychology and architectural and urban design. His studies on brain and behavior around public art have prompted the question, “Is urban design a matter of public health?” Noting that studies have proven boring cityscapes increase sadness, addiction and disease-related illnesses, he dives into research to measure the effect public art has on people.

It Slows Us Down — In a Good Way

Art integrated throughout a city physically slows us down — a benefit in today’s hyper-paced world. Normally, city dwellers walk at an average pace of 5 km (or just over 3 miles) per hour. Ellard compared walking speeds between two locations, one with public art and one without, and found that those who walked passed the artwork dropped their speed by half. This reduction in speed demonstrates how public art influences how we move, think and feel, even when we don’t realize it.

Public art doesn’t only make space look alive; it makes us feel alive. Ellard conducted a study leading a group of people to sites across a city. They answered questions assessing their emotional state on their smartphones and wore skin conductance bracelets to measure their alertness. Around bare buildings he notes, “These people were bored and unhappy. When asked to describe the site, words such as bland, monotonous and passionless rose to the top of the charts.” Near lively facades participants visibly changed. “At the livelier site, they were animated and chatty, and we had some difficulty reining in their enthusiasm.”

Ellard notes that around lively facades, people “pause, look around and absorb their surroundings while in a pleasant state of positive affect and with a lively, attentive nervous system. Because of these kinds of influences, they actually want to be there. And because of such effects, many cities have carefully designed building codes for new construction that dictate some of the contributing factors to happy and lively facades.” His work proves that not only does public art boost emotion, it boosts a city’s and businesses’ bottom line as well.

1. Los Angeles, California: A pair of 70-foot murals by artist April Greiman, painted with hopes to attract new residents to a housing development project, became an emblem for the city. The paintings have appeared in local and national magazines, are used as the imagery for the city’s transit system and are often the backdrop of televised announcements from the mayor. These murals have come to represent LA, giving the city a symbol that resonates with citizens through energy, color and vibe.

2. Singapore: The country’s transit company, the Land Transport Authority, created the Art in Transit program to integrate art into their metro stations. Each piece of work is done by a local artist and gives the station a unique identity that represents its location. Commuters connect with the art, seeing colors, images, designs and architecture that represent their neighborhoods and their cultures. The program has been so successful that they’ve partnered with a local non-profit to give walking tours of the stations, giving everyone access to the art and stories behind it. 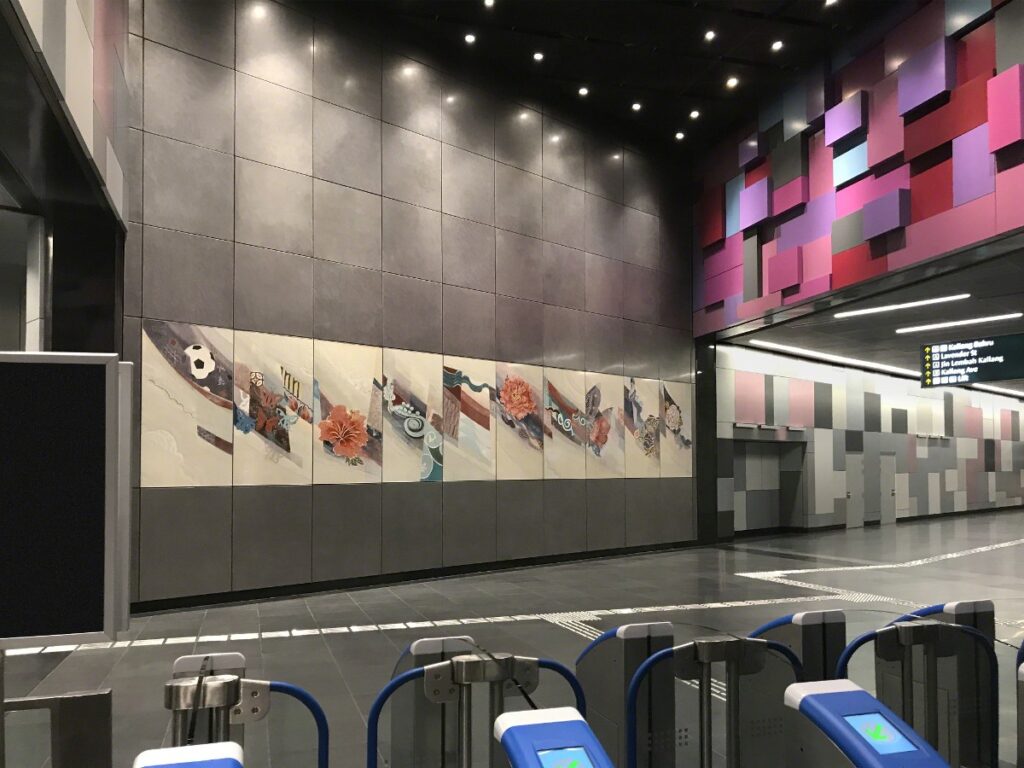 3. Brooklyn Park, Minnesota: The Hennepin County Library commissioned a mural made out of 331 CeramicSteel panels that represent the library’s mission statement, telling the story of the local culture and broader geography through math and science. The mural resembles the pages of two different books;, walking in one direction, residents see global images of galaxies and fossils, and in the other, local images of native plants and the Mississippi River. The mural connects visitors to their city and to the world via books — blending identity, education and beauty into one. 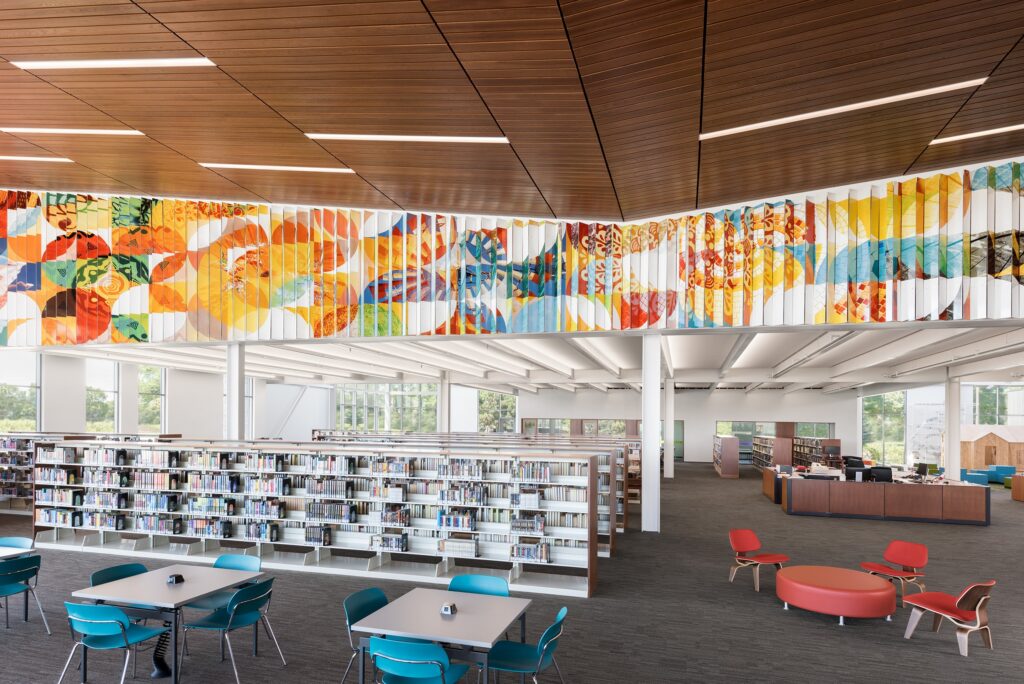 4. Tampa, Florida: Under the Laurel Street Bridge by the Hillsborough River in Tampa, FL you’ll find the art piece Woven Waves. Over 54 CeramicSteel decorative panels, the mural weaves together the multicultural communities that make up the surrounding area through a variety of colors and designs. The art brings new life to the busy walkway and depicts a story of Tampa whether you ride, walk, kayak or cycle by. 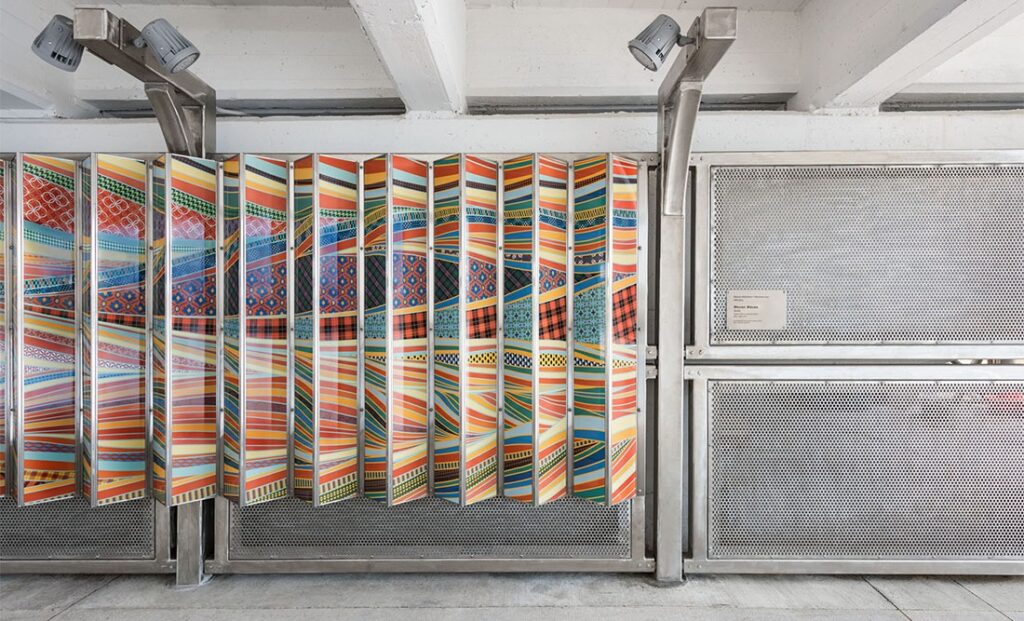 5. Arvada Ridge, Colorado: Another CeramicSteel piece blends the past with the present at the Arvada Ridge Commuter Rail Station. Chromatic Harvest paints to the communities strong ties to agriculture and movement through green, orange and brown tones and shapes that seem to zoom in and out of each other. When commuters race by they catch a glimpse of Arvada Ridge and home. 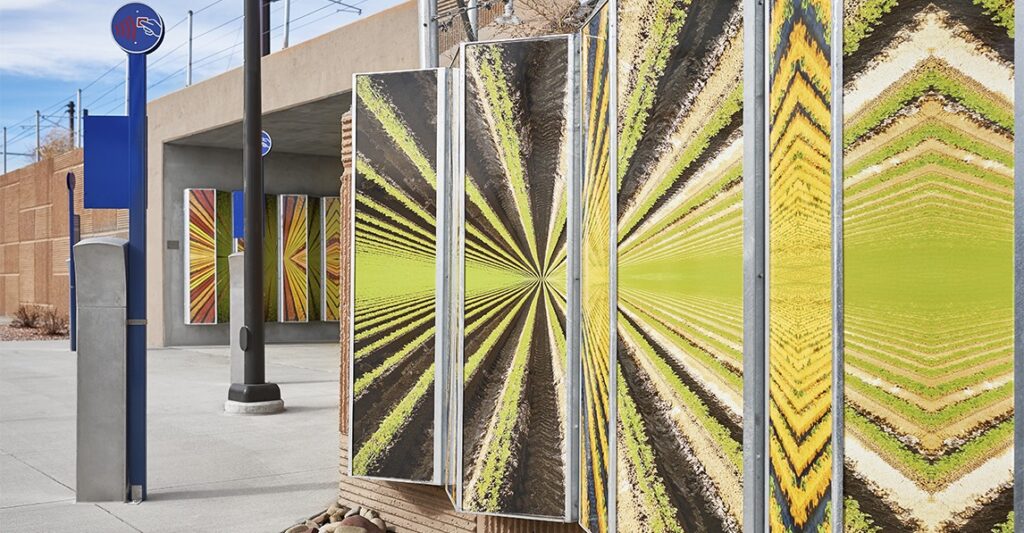